Chemistry is one of the very few branches of science which has such a highly distinguishing feature; namely, the periodic table of elements. However, its link to the field transcends its role as a symbol of a science or a profession. Indeed, chemists also consider that it lays the foundations to and acts as the backbone for their knowledge. As a result, even today the periodic table constitutes an essential point of reference for chemistry professionals and an invaluable tool for learning the discipline.

The Catalan version of the periodic table of elements 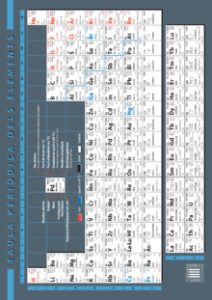 By 1985, while still under the auspices of the Catalan Society of Physics, Chemistry and Mathematics (SCCFQM), Joaquim Sales and Miquel Àngel Pericàs promoted the creation of the Catalan version of the periodic table of elements.

Ever since, the various developments in terms of knowledge of chemical elements have led to updates to the Catalan version with it being re-published in 1990, 1998, 2012 and, most recently, in 2016.

This latest edition includes the four most recent elements validated by the IUPAC/IUPAP Joint Working Party. These elements, with atomic numbers 113, 115, 117 and 118, were officially named in English by IUPAC in November 2016: nihonium, moscovium, tennessine and oganesson, respectively. With the support of the Catalan Society of Chemistry, TERMCAT has recommended the following translations for these names in Catalan: nihoni, moscovi, tennes and oganessó.

With these elements, the 7th period of the periodic table is complete and, with no gaps so far, we celebrated its 150th anniversary in 2019.

The periodic tables prepared by the Catalan Society of Chemistry are available for purchase on the Portal de publicacions de l’IEC. 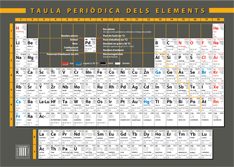 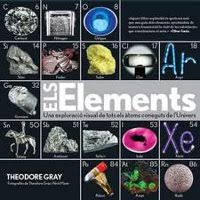